Home Sarafina and the Pirate’s Spyglass by Jaye Helm (sample)

Sarafina and the Pirate’s Spyglass by Jaye Helm (sample)

Sarafina and the Pirate’s Spyglass is one of those books that sweeps the reader away into another world.  When Jaye Helm presented the Sarafina series, there was great anticipation about what the story would be.  We found that the adventures of a teenager, wrapped snugly in the 18th-century, fit perfectly with what our idea of middle-reader and tween story should be.  We know this will be an enjoyable book for youth, boys and girls alike, of all ages.  Sail away with Sarafina!
~ Doce Blant Publishing 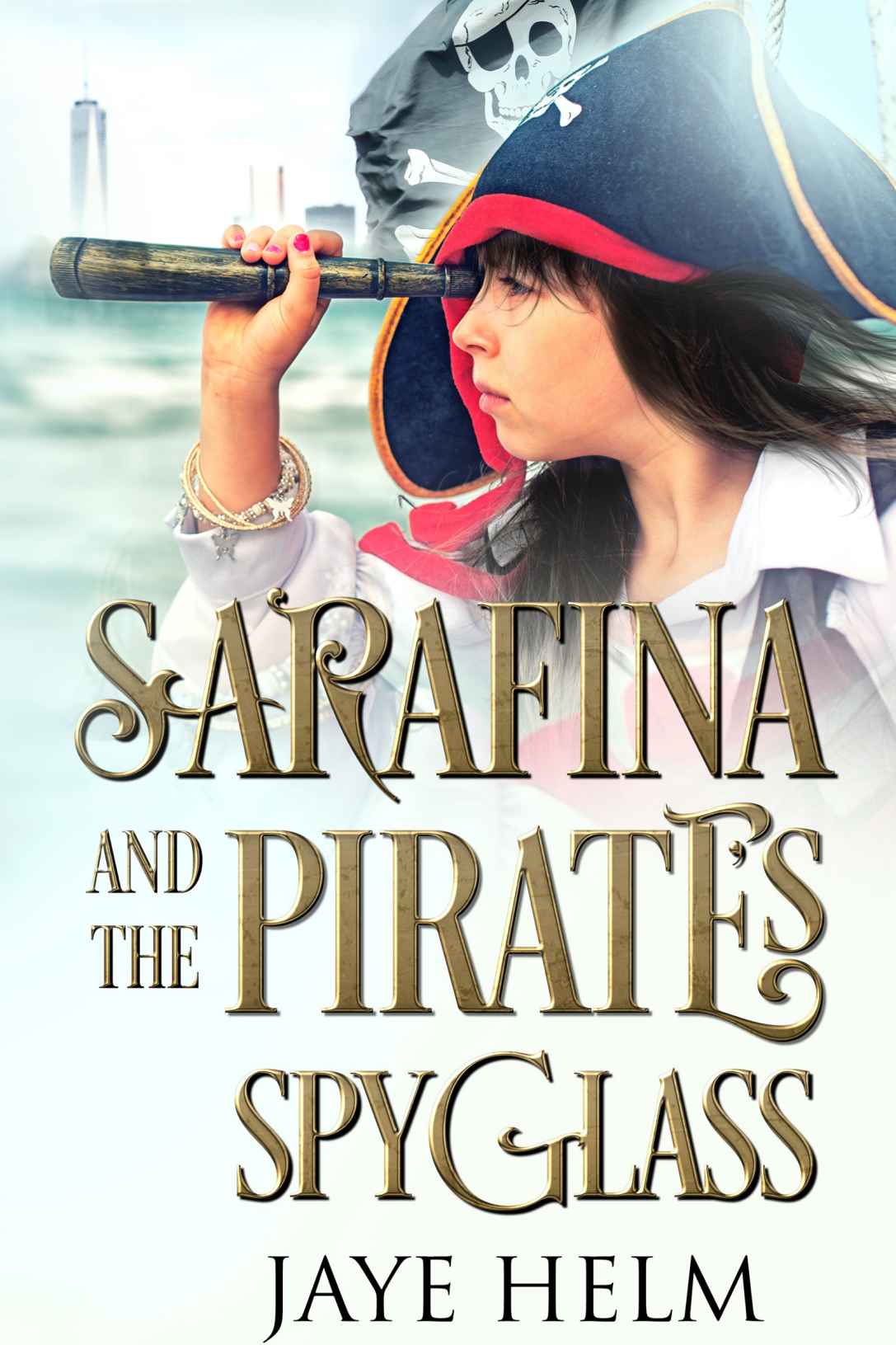 www.DoceBlantPublishing.com
SARAFINA AND THE PIRATE’S SPYGLASS
by Jaye Helm
Copyright ©2015 by Janene Helm
All rights reserved.
This book or part thereof may not be reproduced in any form by any means, electronic or mechanical, including photocopy, recording, or otherwise, or by any information storage and retrieval system, except as may be expressly permitted in writing from the publisher as provided by the United States of America copyright law. Requests for permission should be addressed to Doce Blant Publishing, Attn: Rights and Permissions Dept., 32565-B Golden Lantern St. #323, Dana Point, CA 92629
Published by Doce Blant Publishing, Dana Point, CA 92629
www.doceblantpublishing.com
Cover by Fiona Jayde Media
ISBN: 978-0-9965702-3-7
CIP information on file at the Library of Congress.
Printed in the United States of America
www.doceblantpublishing.com
This is a fictional work. Names, characters, placed and incidents are the product of the author’s imagination and used fictitiously. Any resemblance to actual persons, living or dead, including events and locations, is entirely coincidental.
This book is dedicated to my three children, Aubrey, Jason and Tiffany who breathe life into my very soul.
I would like to thank my sweetheart Arthur Whittam (Cascabel) for always being by my side with words of wisdom.
I would also like to give a great big sincere thank you to Marti Melville for all her hard work and steadfast dedication to see this book all the way through. I couldn’t have done it without you.
And to all my friends, who are mostly re-enactor pirates, and some whose persona are found in the book, my gratitude for your never-ending encouragement.

It’s not that Sarafina doesn’t like antiques — it’s just that she’d rather be at the beach and listen to music on her iPod. This is not her idea of a modern family vacation. That Jack, her younger brother by five years, keeps pestering her only makes matters worse. Aren’t teenagers supposed to be out having fun, just hanging out with their friends? At only fourteen years, Sarafina feels much older than everyone else her age.

Her mother interrupts her thoughts to ask her opinion about a teakettle. She shrugs and her mom moves on to look at some old dishes instead. Sarafina’s dad is busy admiring an old set of golf clubs while Jack plays with an old truck. Even at nine, Jack still seems young for his age.

They had driven quite far to see some history and visit some timeworn shops that were filled with antiques in Charleston, South Carolina. Even though Beaufort, North Carolina is rich in history, which is where they live, her mom and dad still want to look at other people’s old stuff. Their home is in a town that had been visited by Blackbeard and is not far from where rumors say that he lived. Sarafina had even studied about the pirate in school. In August, the town will be inundated with entertainers and re-enactors dressed as pirates, who will come from all over the U.S. just for the annual Beaufort Pirate Festival. Heck, theQueen Ann’s Revenge, which was Blackbeard’s ship, had been found in an inlet near there. And as if that wasn’t amazing enough, the little Maritime Museum located in Beaufort keeps a display of the artifacts from the Queen Anne’s Revenge on display!

Although Sarafina prefers the mall, if even there was one, she tries to make the best of it. She pokes around and looks at one dirty, unidentifiable object after another until she finds a worn-out wooden box tucked underneath an ancient-looking desk. Its shape intrigues her, so she pulls it out and blows a thick layer of dust from the top, which proceeds to make her sneeze. She fiddles around with the rusty metal latch until it finally comes loose. She opens it slowly, half afraid that a mouse will jump out. Instead, she gasps.

Inside is a large brass spyglass. It looks like the kind that a captain of a ship might have — maybe even a pirate. Living in Beaufort, Sarafina knows a fair amount about pirates, especially Blackbeard. As she admires the scrollwork that decorates its sides, she notices four very strange symbols. Beneath them lies a faded parchment paper that is yellow and crumbled with age. She lifts it up very carefully and holds it up to a ray of sunlight that streams in through the window. She then discovers something had been written on it. As she squints through the fancy calligraphy, she can just make out what it says. It reads: “Beware. Have a care.”

Pondering the mysterious words, she thinks that it might be a delicate instrument although it looks as if it is in good shape and seems rather weighty.

She uses her shirttail to clean off a lens at one end but still cannot see anything within the dim interior of the store. Remembering Uncle John and his big boat, she decides he might like to have a fine antique-looking glass. So, she shows it to her dad, who agrees with her and buys it for forty dollars.

While everyone strolls through the shop, Sarafina carries the spyglass to a window that looks over Main Street below. Because she is on the second floor, she thinks that she might get the best view from the window there. As she looks out, she sees the Grandma’s Coffee Shop and the hotel where they are staying. She cleans the lens with a little spit and a finger then points it toward the Grandma’s Coffee Shop. Still out of focus she begins to play with some knobs that lay along the sides, and soon everything becomes clear.

But — she takes another look — there is no Grandma’s Coffee Shop or a hotel. She only sees a dark brown horse that is being hitched up to a wagon in front of an old building. What makes it worse is that she does not recognize the wooden building at all. She lowers the spyglass and looks down the street. Sure enough, there is the Grandma’s Coffee Shop. She slowly raises the spyglass back to her eye and sees the same horse that scratches its head on a hitching post.

Sarafina notices a sign on the building. It reads Joseph Hamilton, Ships Chandlery.

“Chandlery?” she asks herself. “What the heck is that?”

A quick glance down the other side of the street reveals her hotel. Only through the spyglass can she clearly see the wharf, and that is without the hotel to block her view. What she sees amazes her. Docked in the harbor are three very tall wooden ships with great sails that blow gently in the wind.

There are cargos of crates and barrels that are being loaded and unloaded by muscular men with worn shirts and what appear to be odd baggy shorts. Most of them are dirty and she can see the sweat glisten over their skin in the sun’s hot rays.

Frightened, Sarafina lowers the spyglass and takes another look. Sure enough, there is the hotel. She lifts it to her eye again and sees the ships and men busy with wagons. Sarafina thinks this must be a joke that someone is playing with her. But no matter what she does, every time she looks through the spyglass, the ships and horse are there. She begins to feel quite overheated and a little dizzy. The last thing she remembers is a young, dark-haired boy who rode up on a big black horse in the street below. He was about her same age.

Despite a pounding headache, Sarafina opens her eyes and discovers that she is no longer in the antique store. Instead, she is alone in an alley behind some wooden buildings that look to be well over two hundred years old.

“What the heck happened?” she says aloud to no one. “Where Am I?”

Lying next to her on the ground in the dirt is the spyglass. For some reason, it is shiny. She gently picks it up and examines it. Yep! It is the same one from the antique store. She recognizes the strange markings on the sides. Wondering if it might have something to do with her circumstances, she decides to hide it for now. Looking around, she discovers some loose bricks in the building’s foundation. She lifts out a few bricks, carefully places the spyglass in a little cubbyhole she had made, and then places the heavy blocks back into place to hide it. She quickly sprinkles it with some dirt and bits of leaves so that the hiding place will not be noticeable. Satisfied, she brushes the dust off of her hands as best she can.

Besides, she thinks to herself. That spyglass might be quite valuable!

It has been a long time since a really good adventure story for teen girls has hit the market. This one is everything a good story should be with great characters, and a very easy to follow style that is hard to put down. With every turn of the page, there are interesting developments, as Sarafina tries to make her way in the unfamiliar world of the early 18th Century that she has been somehow transported into by an antique spyglass. She crosses paths with many interesting people, including some historic personages in the form of cutthroat pirates that she has to deal with. There is excitement, danger, and humorous incidents depicted in the story as Sarafina moves through the world of hardened scalawags and survives by her wits. Book 2 will continue the adventures as Sarafina experiences life on the high seas as a pirate herself while she tries to return to her own time period.

Great read for all ages! Excitement, adventure and pirates too, who could ask for more!

I bought my Nook copy of this book for my granddaughter and am so happy I did. This is a swarthy, fun story about a young girl who is swept back into the 18th-century through a magical spyglass. Her adventures begin in Beaufort, North Carolina. But that is only the beginning for Sarafina who finds herself suddenly enmeshed in the nautical adventures of the seaport town and eventually on board a pirate ship. Sarafina and the Pirate’s Spyglass is a great middle-reader book for youth who love adventure, mystery and pirates!

Pick up your copy: